Christopher Carosa is an investment advisor by day, but an author by night. The author of two books on investing, a hilarious stage play, and more than 400 articles on every subject under the sun has now published a book that 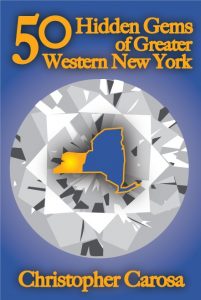 The new book, appropriately titled 50 Hidden Gems of Greater Western New York, is written in a style that goes far beyond presenting mere historical facts. It is written in a light-hearted, entertaining, witty style that will give the reader chuckles, as well as a wealth of facts about our area. One story actually reveals the secret to the elusive boundary of Greater Western New York, and how that not so imaginary line came about.

Among the hidden gems Carosa reveals are…

The author is a real renaissance man. He earned a degree in physics and astronomy at Yale. Today, however, he concentrates most of his stargazing time watching the rise to stardom of Greater Western New York businesses. He then shares that insight with clients as president of the Bullfinch Fund and its investment advisor, Carosa Stanton Asset Management, L.L.C.

50 Hidden Gems of Greater Western New York retails for $24.95 from Amazon.com or from GreaterWesternNewYork.com or catch the video trailer and sneak preview at 50HiddenGems.com. 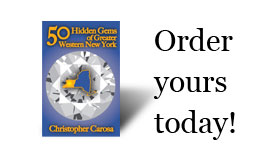 Don’t expect just another listings site. hometownwhiz.com is curated. Got an idea? We’re collecting the best resources on the web, and we’re looking for your suggestions! Got a pointer to a cool blog or an informative forum? Send us a tip.

If you can’t think of a tip at the moment, no need to worry. Just send us your email address and we’ll keep you in the loop. If you specify your hometown and the kind of content you'd like to see, it will help us make this site a great resource for your community, so please consider doing do so.